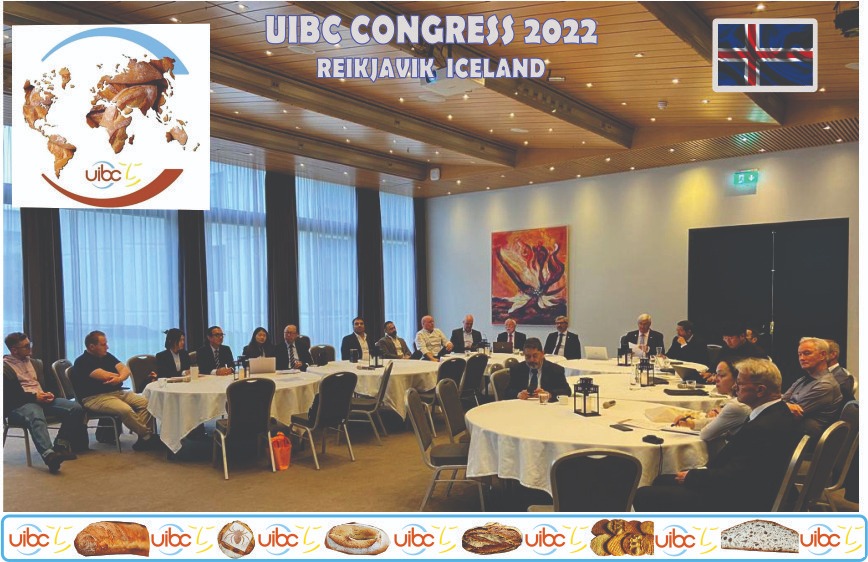 With the Presidency of Günther Koerffer, the UIBC Congress 2022 was held in the city of Reykjavik, Iceland. In the first place there was a special thanks to Antonio Arias for participating as Honorary President and then the President of the National Association of Master Bakers of Iceland – LANDSSAMBANDS BAKARAMEISTARA – Sigurður Már Guðjónsson welcomed the presence of the representatives of the member countries making a brief summary of the activities carried out there. A minute of silence was observed in tribute to HANS NADLER, who passed away on January 1 of this year in San Antonio, TX, USA. Subsequently, the topics of the day were discussed, as well as the reports of the member countries. Nadler, together with his wife Minerva, have been among the most outstanding leaders of the world bakery, having held the highest positions in the UIB -International Union of Bakeries-, in the RBA -Bakers of the United States- and he was the great person in charge of uniting to the Bakers Associations of Europe with the countries of the American Continent gathered in the CIPAN.

Mention was made of Dominique Anract, current vice-president, who has just been elected President of CEBP – European Bakers – and Alvaro Pena elected as president of CIPAN.

The previous minutes were read and approved and a video of the Russian Association was projected and its President Yuri Katsnelson spoke about the situation in Russia. Regarding the activities of President Günther Koerffer, it was highlighted that together with the Secretary General of UIBC Jose María Fernandez del Vallado they visited Brazil where the CIPAN Congress was held and they also visited Mexico together with Dominique Anract to have meetings with the members of CANAINPA and ANPROPAN , the Association of Suppliers of the Bakery Industry of that country. Michael Wippler and Daniel Schneider participated in various meetings with ABA USA. In Spain and within the framework of INTERSICOP, a meeting of Ibero-American Bakers was held, and the Baker of the Year 2021, Domi Velez, participated there.

Regarding the Young Bakers competitions, Bernd Kuschner mentioned the new rules and a new way of competing and the successful competitions that have been developed as well as those planned for the coming months. Regarding the dissemination of the news, it was mentioned that currently there has been a good participation in social networks in which, particularly on Facebook, there is participation in hundreds of groups of bakers (183 groups in Europe and Asia and 135 in America) reaching a potential of more than 10 million readers of the bakery, which is done in 15 languages. In this regard, it was also requested that they not stop sharing the report of each country, because you can learn from everyone and that is very important.

When the financial issue arrived, the Finance Report was considered correct and the 2022 annual expense report as well as the 2023 Budget were approved.

The calendar for 2023 was approved, like the INTERNATIONAL COMPETITION UIBC JWC

In February 2023 in Taiwan 8 countries will participate with 12 participating bakers / junior confectioners each.

2020 was the worst year in history due to the effects of the pandemic. 46.5% of the bakery market is held by 7ELEVEN. 20% produce Cookies 20% and the rest consumes flour (bread, candy, cake etc). Currently a permanent rise in prices. There is a lot of work with the children making their own bread and there is a lot of work with marzipan. Gluten-free flour made from rice is worked using local ingredients and always innovating products. The ToGo vending machine sales systems where the consumer orders by phone and in half an hour you pick up the product. Automatic machines to collect product especially for refrigerated and frozen products which is a novelty. As for campaigns, Moon cake (moon festival) with many flavors, pineapple, apple, potato and is very popular for the beauty of the moon.

The main problem that arises is lack of energy. Inflation has had no limits and everything is more expensive each time and increases with demand and, as in several European countries, energy has increased a lot. The Association is always looking for new bakers and confectioners, training and professionalizing them.

They only have 45 bakeries and they report that due to the pandemic, sales have dropped a lot, although today everything is getting better. They have an inflation of 9.9%. The frozen bread trade is growing, a 5,000-ton market that includes donuts and pecan pie. Hotels buy thousands of frozen pieces, because they don’t want bakers there.

Lack of staff. There are fewer and fewer employees in bakeries. 60% are small. Consumption has decreased and bakery supplies have increased from 18 to 25%. Double electricity and continues to increase, also gas. The situation is very difficult. It is difficult for bakers to organize the business every day. The Future is baking together, working together, and amicably. “Bake your own future” is a motto. The opportunities grow, the risks also, and the economic situation as well. Bread Day is celebrated every year and also German Bread Day on May 5 of each year.

The same problems as the bakers. There are 3,400 pastry shop owners where 40% are women in the sector and more and more are joining. For 3000 women there are 800 men. 40% shops and 45% coffee shops in restaurants

The COVID pandemic brought about many changes. And something serious now is that Electricity and gas is increased by 500%. Being together is part of the power among the Germans, so problems can be solved, since most are small producers. The great ones fight alone.

Consumption has dropped from 30 to 21 kg of bread per person. More and more people prepare bread at home, sell it, and obviously they are not officially registered. These people do not go out to the street to sell. The negative impacts are COVID and the war with Ukraine. There are currently 11,000 bakeries and pastry shops. Many bakeries have closed

The work is becoming really difficult due to the unleashed war. The cost of the work has increased by 14% and it is a significant increase. Plus the costs in social security.

As in Europe, energy is becoming more expensive. The cost of the job today is US$16 per hour for the bakers. 100% increase in MP. And the clients do not understand why the increases are given. In general, small hotels are our clients. Making products in boxes and selling them in the supermarket (how to cook the soup) (make the bread) does not work, and it is becoming easier to find processed products.

He expresses that they are new as an Association and that they are in the Congress to learn. They have a market of 50′ thousand inhabitants. They only emphasize that there is an excellent delivery service.

They present a written report (it will be released later) and only mention that the consumption of fermented bread is growing.

French bakeries have about 80,000 workers and he proposes that we must make the profession more attractive and work together. As in many countries, there is more and more bread that is made at home. The cost of energy is increasing, including the ingredients.

The Spanish market has 12,000 industrial bakeries and 30,000 artisan bakeries, with a total of 190,000 workers. Consumption has decreased a lot in recent times and the COVID first, and then the war have affected a lot. Campaigns against bread destroy consumption, but there is great cooperation from medical institutions that promote bread consumption, and that helps. E-commerce has increased a lot. Lately the industry is also affected by increases in energy, and ingredients from 30 to 300%.

Spanish institutions have successful campaigns in favor of bread. 6 servings of bread per day are recommended. Bread goes with everything, easy to buy, combine, store. Good morning with Bread! It is a campaign with very good results.

In Russia, the number of bakeries is decreasing, said the President of the Russian Guild of Bakers and Confectioners and Vice President of the International Union of Bakers and Confectioners, Yuri Katsnelson, in his presentation and mentioned the impact of the coronavirus pandemic on the economy, in particular the change in the level of the bakery.